“My first view of Mount Kilimanjaro was in the light of a full moon as we drove to the town of Moshi in Tanzania. It towered over the surrounding plains, its flat peak poking through the clouds and the last of its vanishing glaciers trickling down its sides.

How in the world did I end up here? Running has taken me to many beautiful places over the years and now I was fortunate enough to attempt to become only the ninth person to circumnavigate the mountain on foot, a distance of 180 miles over 8 days.

The run is fully supported so I only had to carry my food and water for each days leg.

Our group of 5 consisted of 3 Idaho residents and 2 Germans and we were joined by 5 Tanzanian Guides/Runners. I would later learn that they were all accomplished runners having run sub-2:20 marathons and we were also joined by Tanzania’s fastest woman marathoner with a 2:27. Oh my gosh. We soon learned they were there to run with us and support us all the way no matter what the terrain and pace were like. 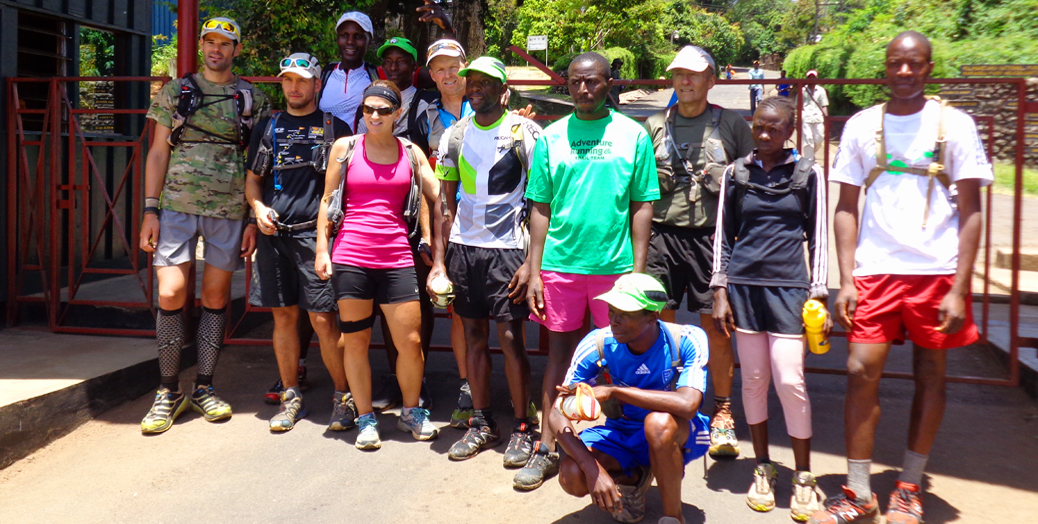 Day 1 was an eye opener. A big smack to my smiling face. I have run lots of races, trained thousands of miles and yet that 20 mile day was the hardest I have ever done.

As we left the gate at the entrance to the Kilimanjaro National Park on a counter-clockwise loop around the mountain the trail wound through small fields of maze and corn and into lush coffee fields. Time out. Coffee. I became like a mule that doesn’t budge. Please just a taste. All I got was a bean to chew on. On and on we hiked and ran, further away from the comfort of our cottages. On and on, up and then down and then repeating it all again. There were lush green valleys and open fields and dusty trails. Hills so steep you could reach out in front of your face and touch them. I kid you not. It wasn’t that the climbs were really long, it was that they were short but steep which made running impossible at times. We would often regroup every hour or so for a short break. The goal was to always stay together for if we strayed down the wrong trail the day would become longer, much longer. Red ribbons on trees guided us but I have to say that our guides had an uncanny sense of direction. They always knew which way to go and often the trail would vanish into a small sliver of bushes and branches cut in the canopy to lead us forward. Our first night was spent on the grounds of a secondary school in a tiny village. As we ran down the dirt road I could see school children dressed in green shirts and blue sweaters waiting for us. In a place so remote was such happiness. A school with no windows, a chalkboard and wooden desks, yet order and discipline and uniforms but most importantly smiles. I could never really get over the white teeth that every child possessed. Perhaps it is the lack of sugar in their diet. Perhaps we could take that as an example to curb our western eating habits.

“Red ribbons on trees guided us but I have to say that our guides had an uncanny sense of direction.”

Our end of days became a ritual of washing up in a small bowl of hot water, top to bottom with the feet last. Oh the glorious feet, my dogs as I affectionately called them, were unrecognizable. Just flesh and orange dirt. After cleaning up we would relax in the dining tent with tea and papaya and popcorn. Dinner would come around 7 p.m. and consisted of different nightly soups as a first dish. There was succulent pea, banana, cauliflower and sweet potato soups followed with bread and loads of butter. When you burn the calories, the body cries out for things you may not normally eat. My body was crying. The main course would always be rice or potatoes with chicken or beef on the side, perhaps some peanut sauce, plates of green beans and onions. Often times we would have a stew and always a finale of fruit medley. Beautiful sliced papaya and mango and bananas, rhubarb and strawberries. Life could not be better in those moments.

Retiring to our tent I would load my small pack with food for the next six to ten hour day and then crawl into my bag to fall asleep to the nightly sounds of birds and monkeys in a sweet serenade.

From those first few days of deep valleys and gullies we emerged on the drier northeast flank of Kilimanjaro, very close to the border of Kenya in a place called No Mans Land.

Here I would see the harshest living conditions yet. Small wooden shacks in a line at least a half mile long. No electricity. No water. Dirt everywhere. Small plots of wheat and corn. Stray dogs. Barefoot children wearing Sesame Street shirts staring at us as we ran by. I can only compare it to conditions in our country 200 years ago. I now understand the water problem in Africa. I now understood why this run was guided and supported. Water is life.

In a Maasai settlement we camped in another schoolyard. A soccer game was being played by the young men of the village most I assume were not Maasai however one was and he was tall and thin and wore a flowing red robe and his sheathed knife hung from his hip. Periodically he would stop and answer his cell phone. What a contrast of the past and present. His heritage infiltrated by the progress of the world.

The temperature would rise the next day. What had been comfortable running at 75-80 degrees was now testy and lets just say miserable at 85-90 degrees. That night we were fortunate enough to have a shower at Simba Farm. Established in 1918 it exists on 6000 acres. With whitewashed walls and open verandas it was truly from the Out of Africa movie set. There is something about a shower, something about seeing 3 days of sweat and dirt run down the drain that makes a glass of wine taste oh so much better.

With the sunsets came satisfaction and often remorse. Each step is the last on this path or this road.

“Running brought me here and it takes me away.”

The days that followed took me through forest reserves where active logging takes place. Tanzanians take a conservative and long term look into the future. They meticulously clean the brush and then replant for future harvesting ten years from now. They do not believe in slash and dash and immediate profit but in continued replanting and profit. More of managing their natural resources.

As we exited these lowlands the forests walls steepened and we entered a densely settled area of Arabica coffee farms. These farms used centuries old irrigation canals dug along the mountainsides and our trail wove for many kilometers along these, shrouded by huge Eucalyptus trees.

Perhaps the best part of each day were the mornings. The forest would come alive with the sounds of birds. To many different songs to identify. Often you could hear the hum and drone of the bees as they moved back to their hives. Then one of our Tanzanian friends, Idde, would arrive with our morning coffee from the freshest beans. Life was very simple. Coffee. Eat. Run. Eat. Sleep. Repeat. No computers, no phones, no traffic.

Just the pleasure of propelling myself forward with two legs. 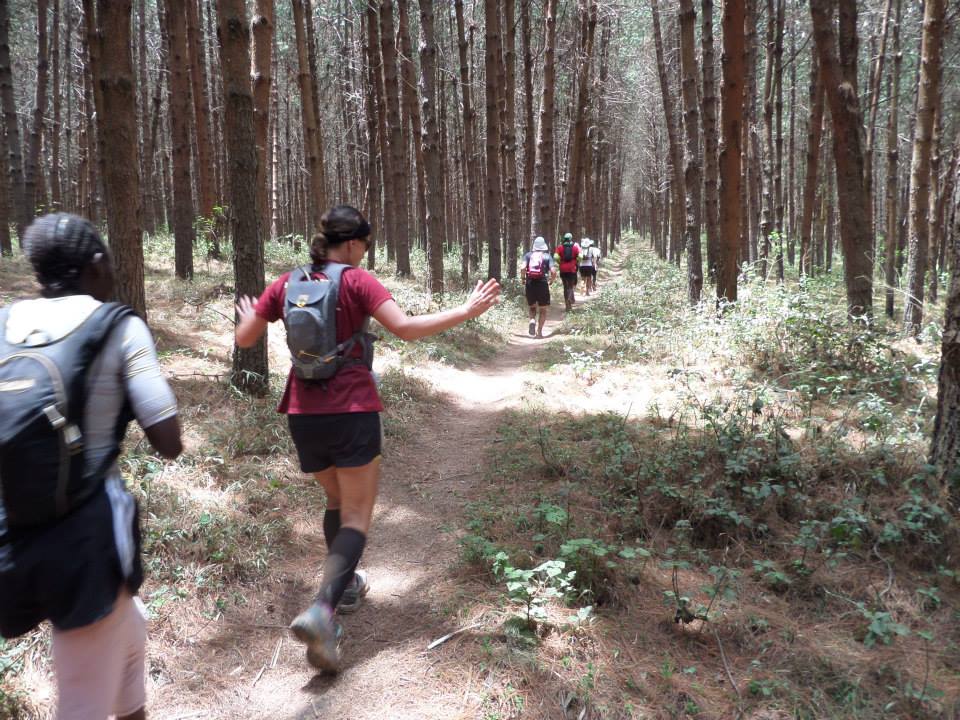 On Day 7 we would spend our final night in that same shadow of Kilimanjaro that I had seen on my drive from the airport. The valleys and forests and waterfalls would soon be left behind.

Kidia was the first European settlement in this region and the original church and mission station are still intact and the mountain ridges in the area are predominately Lutheran or Catholic depending on the first mission group that worked there.

As the sun set and the dissipating glow touched the flanks of Kilimanjaro I realized that my days, these miles on these trails, these valleys and villages had all passed in a blur.

With morning came coffee and papaya and spanish omelets and toast and avocado. Our final breakfast over, the final day began.

My running has always consisted of a set point in the distance. Be it a finish line, a state or as in this run, the next tree. Now sitting here I look at two legs bearing the scrapes and scratches of falls on those African trails. I close my eyes.

“I feel the joy as I run in a cocoon of my Tanzanian friends, surrounded by their grace, beauty and speed as we plunge down a forest road.”

I hear the whispers through the trees, I feel the sweat on my forehead, the labored breathing of endless climbs. I feel the joy as I run in a cocoon of my Tanzanian friends, surrounded by their grace, beauty and speed as we plunge down a forest road. I smell those early morning aromas of fresh coffee, taste the first splashes of papaya and mango on my tongue. The wind touches my skin and cools me. Winds carried over the summit above me. I have been blessed by it all, to see with eyes that still glimmer in the golden years of life, to feel each step through my legs absorbing another journey, sunrise to sunset. One hundred and eighty miles. Success. More importantly though I learned that success comes to us everyday in some way and often cannot be measured by a did or did not but what you take from the journey.”