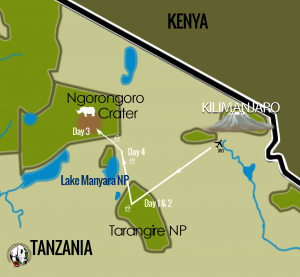 Highlights
• Overnight in a permanent tented camp on a high ridge above the Tarangire river where elephant and buffalo come to drink.
• Day inside the Ngorongoro Crater, “Africa’s Eden.”
• Sundowner overlooking Lake Manyara.
• Visit to a Maasai homestead.


24th Aug:  Tarangire National Park. Ngorongoro Highlands.
Day in Tarangire with breakfast and lunch at the lodge. Discuss game drive options with your SENE guide (such as daybreak drive with return for breakfast, then a longer drive later in the morning).
Depart after lunch for the Ngorongoro Highlands.
In the late afternoon stretch your legs with a guided two hour light hike through the forested highlands inside the fabulous Ngorongoro Conservation Area, where a majestic 150‐meter waterfall awaits. Trek onward to visit the elephant caves, so‐called because the deep recesses in the valley wall are created by elephants digging up the earth to ingest the mineral‐rich soil. The rich soil also attracts buffalo, bushbuck, waterbuck, and baboons to the area.
Overnight: Tloma Lodge.
Meals: B,L,D
Drive time to Ngorongoro Highlands: 2 hours

25th Aug: Ngorongoro Crater. Lake Manyara Region.
Enter the famous Ngorongoro Crater for a day game drive in what is often referred to as “Africa’s Eden.” The descent into the crater, 2,500 feet below the rim, is an unforgettable experience. While only 100 square miles in area, it offers several distinct habitats: acacia forest, swamp, short grass plains, long grass plains, riverine, and woodland. Each habitat attracts a unique variety of the crater’s 30,000 resident animals that create a density and diversity of wildlife unseen anywhere else in Africa. Picnic lunch in the crater.
In the afternoon depart the crater and descend to the Maasai Steppe surrounding Lake Manyara.
Guided walk (30-45 mins.) by local Maasai to a viewpoint overlooking Lake Manyara for a bush sundowner.
Overnight: Isoitok Camp Manyara.
Meals: B,L,D
Drive time to Isoitok: 1 hour

26th Aug: Lake Manyara Region. Arusha.
Morning at Isoitok with breakfast and lunch.
Visit a Maasai boma, taking a look behind the scenes to experience the daily living of the Maasai and learn about the social structure, marriage, and family roles and responsibilities.
In the afternoon return to Arusha to see this commercial capital of northern Tanzania. Onward to Kilimanjaro Airport for flights homeward.
Meals: B,L
Drive time to Arusha: 1.5 hours; onward to Kilimanjaro Airport: 45 mins.

Inclusions
Exclusions
Cold beverages and alcohol; activities on safari and at lodges that require additional charges; gratuities to trip leaders, guides, drivers, crew, or other staff; international airfare; airport departure taxes; additional accommodations made necessary by airline schedule changes or other factors; pre-trip expenses such as immunizations, travel insurance, passports, and visas; and any expenses of a personal nature, such as souvenirs and laundry.
Disclaimer
Accommodations listed in sample itineraries that SENE creates may not be available on requested dates, in which case we will find a suitable substitute, striving to match the standard of the original.  We reserve the right to adjust the trip price if accommodations change.  Trip prices are based on SENE costs, fees, and supplier prices in effect at the time of booking. SENE reserves the right to alter trip prices should inflation, cost of fuel, labor, materials, or exchange rates change. If the Tanzania National Parks Authority (TANAPA) raises park fees, or any hotel, lodge, camp, airline, or any other service provider raises their rates, SENE reserves the right to require additional payment from the client.